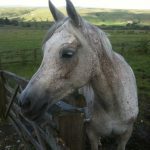 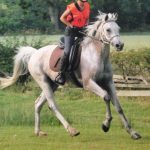 To ride a winning race 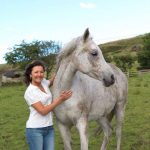 At home with mum

Nazka stands at 15.2 hands and is now aged 16.  She has been a superstar since I have owned her this past 6 years.  She had no history of Endurance when I bought her but she went on to reach the dizzy heights of completing race rides up to 120k in a day successfully and finishing in the top 10 Nationally every year of her dazzling career.  Her successes are far too numerous to mention here but she is the only horse ever to have been awarded Highpoint Champion of Lancashire for four years in succession, she trained and competed with the GB Squad for four years and was selected for the Home International England Team in 2014 and went on to win her 120k race ride for England.  She has many other wins to her name including winning the National Green Dragon Team trophy for three consecutive years and achieving International Qualification status as a 1 star FEI (Federation Equestrian Internationale) horse and successfully completing the 2 star distance of 120k in a day.

We are hoping that Zim Nazka will produce a 2016/17 foal for us this season… so no long distances for her this year.  Oh and by the way, another notable achievement of this lovely horse was to produce Little Lily! Yes Lily is Nazka’s foal!