Recollections of Horsing Around: an Obituary to Minstrel Max and Miss April 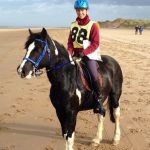 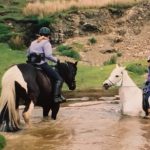 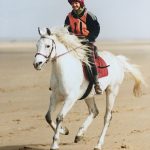 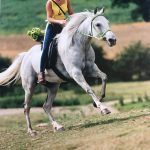 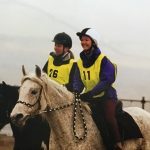 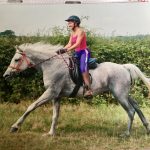 Minstrel Max , owned by Sam Parkinson and Miss April, owned by Jackie Lloyd covered thousands of miles together on Endurance rides, pleasure rides and horseback holidays over a period of almost twenty years. They were great pals and there was never a cross word between them. Sam and I met through our horses in the early 90’s and have remained friends ever since. We have Max and April to thank for that! How fitting then that Sam and I should lose our wonderful companions on the same day – and so it seemed appropriate as well as a fitting tribute to two fantastic steeds, to write about them together today!

Here are a few words from each of us /of our memories:

April found me, not the other way around as is usually the case. I certainly wasn’t shopping for a horse! In fact, I had only just learnt to ride back then, in the early 90’s – I was a late starter; when one day along came April’s owner to ask if I would like to exercise her! At this point I had only hacked out on riding school ponies, so the very prospect scared me to death. But, after just two or three rides out, alongside April’s mother, Amber, I was given total freedom to ride Miss April whenever and wherever I wanted. Here began my love affair with that very special horse in particular, and with the Arabian horse in general. I was immediately afflicted with the severe condition commonly known as “Arabitis” and I became determined to make the lovely Miss April my very own. A few months later I fulfilled my ambition of owning her and from there on we were inseparable. We hacked out endlessly together and were always reluctant to turn for home. It was on one of our very long rides out locally in Riving ton that we came across a posse of riders who trotted past us at a stonking pace, all wearing bibs, and many riding Arabian horses. Unable to resist the temptation to engage in a lively trot, I pushed April on and spent a happy hour riding alongside them, chatting happily about the ups and downs of horse ownership. I discovered they were riding with “The Endurance Horse and Pony Society” and so when I eventually peeled away from them to head for home, I took a detour into the “venue” where they had started from to obtain more details! Soon after, I met Sam and her loaned horse and we rode out together a lot. Then Sam bought Max and from then on our two horses became “partners in crime”. We have been involved in Endurance ever since.

I have so much to thank Miss April for. She loved what she did and we loved doing it together. We were a partnership and we had a ball. I’ll never forget her; you never do forget your first horse! But she also gave me so many “firsts” for which I shall be eternally grateful : first solo ride out, first trot, first canter, first rosette, first award, first fall, first accident, first horse riding holiday, to name but a few. She made me believe in myself – I always believed in her.

I miss her every day that she is gone but I will remember her kind eye, her soft whinny and the wind in our hair! I’m am proud to say that on her very last morning she ate a hearty meal and trotted up the field with a spring in her step and a light in her eye. It was a last act of kindness, the hardest thing I have ever had to do, but I did it for her; my friend and companion for more than twenty years… Goodnight Miss April, you will always be in my heart.

Sam and I loved you both

You gave us so much

We were proud to partner you

Proud to ride you

Proud to care for you

And we will be forever proud to remember you.