Question: Who in their right mind would set a 3.45 am alarm call – and why?

Answer: an Endurance rider, that’s who!  … For the first ride of the endurance season, that’s why!

So there we were,  bleary eyed, loading horses at 4.00 am ready for the journey to The Heart of England and The Cannock Chase Ride. There was a quiet excitement in the air, and Lily and Khalifa felt it too.  Snorting and snickering in the darkness,  they loaded, a little on their toes, and we were off?

We arrived at the venue first and rather  early, so we busied ourselves with preparations whilst the horses tucked into their hay nets, quietly confident about what was to follow.

Having studied our maps beforehand we set off calmly and confidently onto the route.  Within minutes, even after a long winter’s break, the horses knew they were back to the job they love and quickly settled into their stride, happy to be competing once more! The route was stony in places, muddy in others and presented some challenges in terms of getting into a steady rhythm but they were happy to oblige and varied their paces, whenever  we asked and according to the terrain.

We had planned to complete the ride in a fairly slow but respectable time, being the first one of the season but made the decision to take it even steadier due to the unforgiving terrain.  We rode happily into the venue at the end of our first loop of 32k, delighted with the performance of the horses and thrilled with their recoveries. All good through the vetting and so we were ready to take on the second phase, a further 32k and the same route as our first: or so we thought! But The Gods and the Marker Vandals had other ideas! We noticed some of the route markers missing in places but continued to follow those that were still in place and used our map to confirm where we thought we were … but the tracks are all very similar on The Chase … and then we had that sinking feeling, that sense that all was not well.  After deliberating, studying the map, re-tracing our steps, looking for landmarks, we quickly discovered the markers didn’t match the map! Then came the dawning… not only had the markers been removed altogether in some places, but others had been re-positioned quite deliberately to force us down the wrong tracks.  We had fallen victim to marker vandals and now we were hopelessly lost!  We covered lots more ground than we should have done, riding up and down tracks, testing each one out in an attempt to navigate ourselves back onto the route. By this time, we were beginning to realise the risk of being out of time and the danger of subsequent elimination.  The stress was beginning to show but throughout all of this our two lovely steeds asked no questions and simply did as we asked of them.  What angels they were! Trying to keep each other calm, Carolyn and I picked up the pace when we eventually believed we were back on course and heading safely home, but we had no time to waste!  Not many words were exchanged on those final few kilometres.

Finally, the venue was in sight and we cantered in with minutes to spare … to an empty venue and to the organisers and vets waiting in a posse to greet us with cheers and applause.  How embarrassing!

To our delight both horses had fantastic heart rates even after their fast canter in, along with very pleasing recovery rates, and finally presented in the low 40’s and sound!

Phew! Not quite the way to kick of the new season: a far greater distance completed than 64k, the very last team to leave the venue and all in all, an extremely long day.

But all’s well that ends well: fit, happy horses, exhausted riders and crew, and a long but safe journey home … so here’s to the next one, which will hopefully be somewhat less eventful.

Thank you Khalifa and Lily for being such superstars and keeping Carolyn and I sane when all else failed … and thank you to all the organisers for your hard work, dedication, and patience! 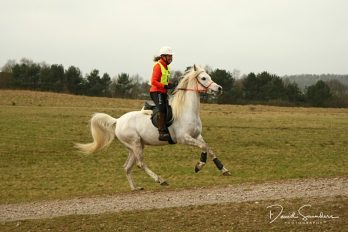